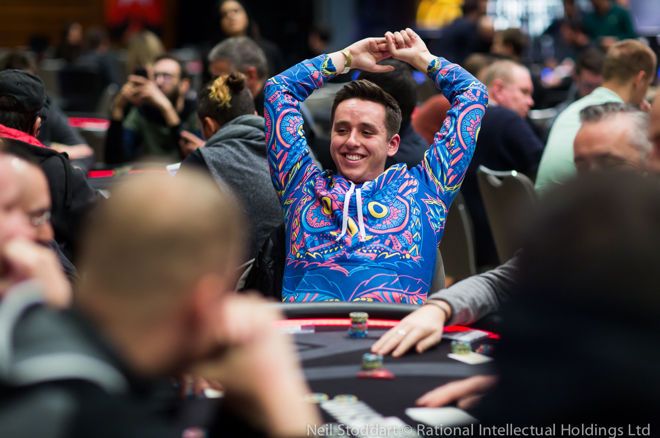 Jack “JBHInfinity” Hardcastle will look back on May 24 fondly as it was the day he banked his career-best online poker tournament score.

Portsmouth’s Hardcastle was one of 2,146 entrants in the XL Inferno Main Event at 888poker. His first $250 bullet didn’t reach its intended target, but the his second one did. Hardcastle found himself on the final table and guaranteed $5,446. The prize money continued to increase with every player who busted, including “ValVenis120” of the UK who crashed out in sixth for $19,163.

Hardcastle sent Argentina’s “lapechunga4” home in fifth, before his own tournament ended abruptly in fourth-place. He jammed with ace-jack of diamonds and “junijuniorz” called with pocket nines. Hardcastle flopped a diamond flush draw, but his opponent hit a set of nines. A seven on the turn gave Hardcastle more outs, but his opponent improved to a full house on the river.

This awarded Hardcastle $32,780, the largest online prize of his career so far. It’s only a few months since he netted his largest MTT prize. He finished seventh in the $10,300 MILLIONS UK Main Event and walked away with $130,000. The future is bright for Hardcastle.

Another two Union Jacks were on the final table of the $25,000 Sunday Challenge. “pro_active” collected $1,092 for their seventh-place exit with “Iwolfwhite” padding their bankroll with the $3,525 third-place prize.

Over at PokerStars, Conor “1_conor_b_1” Beresford continued his ridiculous form with victory in the $1,050 Sunday Supersonic. Beresford topped a 143-strong field to secure another $30,492 prize. Keith “Kungfumonk” Johnson joined Beresford on the final table, but ran out of steam in fifth place, a finish good for $10,643.

Paul “Fold Machiii” Dando was another British star who won a Sunday major at PokerStars. Dando won the Hotter $215 PKO event for a combined $21,581. Christopher “NigDawG” Brammer scooped $2,804 for his seventh-place finish while “!Mp!yaw” netted $3,709 for their fourth-place exit.

Some of the other notable scores at PokerStars on May 24 included:

There were some big scores over at partypoker too thanks to the WPT Online Series and Super High Roller Bowl Online running.

Ben Heath finished second in the opening Super High Roller Bowl tournament. He turned his $10,300 into $148,200. Heath was joined on the final table by Christopher Fraser who won $26,600 when he fell in eighth-place.

Finally, for partypoker at least, Sam Mather won the $55 Mini 8-Max Turbo Bounty event of the WPT Online Series and padded his bankroll with a combined prize worth $11,293.

Rounding off this week’s update are the results from GGPoker. The site has proven to be a happy hunting ground for British and Irish players recently and may 24 was no different.

“Wayneo” fired two $1,000 bullets in the $1K Turbo and that second bullet resulted in a third-place finish worth $8,854. GGPoker regular “pDNA” finished fifth for $5,067 with “MaShaAllah” collecting $2,194 for their eighth-place finish.

Some of the WSOP Circuit Series events feature real names, so we known Gavin Cochrane was the third-place finisher in the $5K Omaha event. This deep run saw Cochrane reel in a $38,478 prize.

Buy and sell MTT action for free at GGPoker