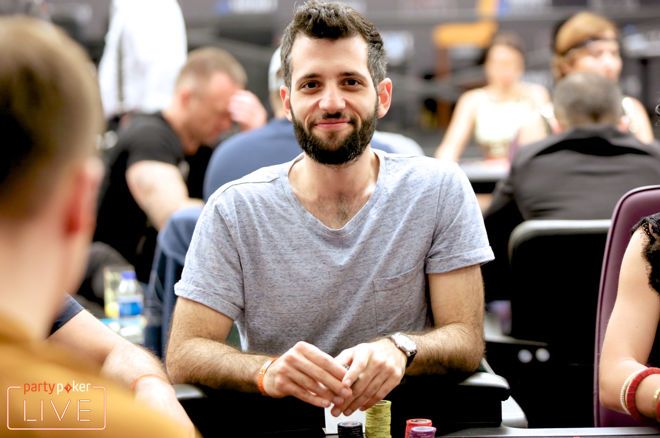 Four more champions were crowned on the second day of the Irish Open Online on partypoker, including the biggest buy-in event of the entire festival as well as the excitement of The Hendon Mob Championship.

Satellites have been running all week in the lead-up to the €5,200 Irish Open Online High Roller, but in the end there could be only one winner, as Ioannis Angelou-Konstas followed up his cash in Event #1 yesterday with a victory here worth €172,188 after a heads-up deal.

Following the elimination of Jorryt van Hoof in ninth place, the final table of eight was confirmed with Ioannis Angelou-Konstas holding the chip lead with nearly three million in chips.

The action was fast and furious at the final table. Thomas Muehloecker sent both Jack Sinclair and Dario Sammartino to the rail in a crazy three-way all in. Muehloecker held pocket aces against the nines of Sinclair and the jacks of Sammartino. A Jack on the flop vaulted the Italian into the lead, but an ace on the river sent them both to the rail.

There was then another three-way all in between Lucas Reeves holding ace-queen and Alexey Savenkov with pocket sevens, but they were both behind to the big stack of Lukas Matthias Nowakowski who had picked up kings. The big pocket pair held and after Muehloecker finished off Akseli Paalanen, suddenly play was three-handed.

With a 56-big blind average, the three battled away as Nowakowski moved into the lead. Muehloecker was sliding and eventually succumbed to Nowakowski, calling off his remaining stack with two pair only for the German to have rivered trips.

At this stage, Nowakowski held 5.1m in chips to Angelou-Konstas' 3.7m, but the pair played one hand where Konstas took the lead, now with 4.8m to his opponent's 4.1m. The two then agreed to a deal, with Angelou-Konstas taking home €172,188 and the title of Irish Open Online High Roller champion.

There were a total of 167 players in the first Pot Limit Omaha event of the Irish Open, with 24 players cashing.

This was just the latest Irish Open Online tournament to exceed its guarantee. Initially a €15,000 guaranteed tournament, the prize pool eventually topped out at €25,050.

There were a total of 175 entries in the €320 Heads-up Tournament on the Irish Open Online, and after over five hours of play, Gabor Szabo was crowned the winner.

The partypoker client shows that he indeed finished in first place, but a heads-up deal took place between him and final opponent Frederic Max whereby they each took home the same prize of €11,025.

STRATEGY: A Beginner’s Guide to Crush fastforward on partypoker

The Hendon Mob Championship almost doubled its guaranteed of €50,000 as part of the Irish Open Online, with 379 players entering generating a prize pool of €94,750.

In the end, it was well-known New Zealander Sosia Jiang who took home the top prize of €18,382 after defeating Morten Mortensen heads-up.

The Irish Open continues today with four more events including the start of the €1,100 Irish Open Online Main Event that comes with a whopping €1,000,000 guarantee!