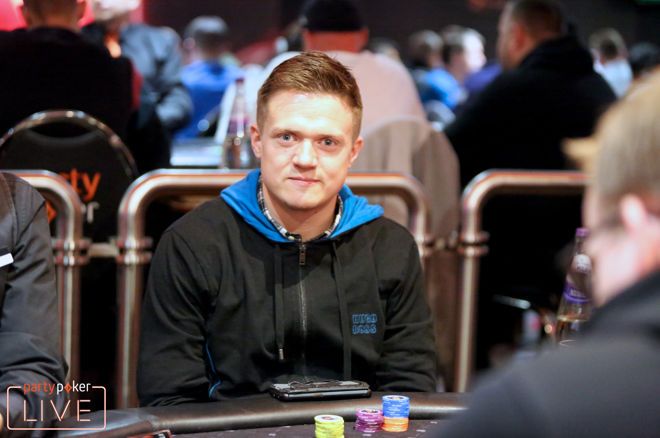 Popular poker pro Ben Dobson won the 2020 GUKPT Manchester Main Event, adding to his many victories, including his WSOP bracelet. Dobson collected £75,510 for this latest win, the fourth-largest haul of his live career to date.

The Grosvenor Casino Bury New Road in Manchester was teaming with poker players thanks to 317 of them turning out across two starting flights. Only 30 of those starters saw a return on their £1,110 investment, leaving almost 290 players to make the journey home empty-handed.

Some 110 players progressed from the brace of Day 1s. They were whittled to a more manageable 20 upon the conclusion of Saturday’s Day 2.

Day 2’s casualty list read like a who’s who of poker. Sam Grafton, James Clarke, Kevin Houghton, Guy Taylor, Daiva Byrne, Richard Kellett, and Tom Middleton were among those failing in their quest to bank some of the £317,000 prize pool.

Thirty-first place, and the unwanted title of bubble boy, went to Leo Farodoye who bet 90,000 with pocket queens, leaving himself 2,000 chips behind. Attila Havacs called with ace-king of diamonds. The flop fell ten-high and all spade. Farodoye put the rest of his chips in the middle and Havacs called. An ace on the turn was joined by a deuce on the river, which burst the money bubble.

The day ended with Ben Winsor in the all too familiar position of chip leader. Winsor, who is the only player to win two GUKPT Grand Finals and do so back-to-back, was on course to become the GUKPT’s first-ever four-time champion.

Former EPT Barcelona runner-up Steve Warburton was Day 3’s first elimination. He got his last eight big blinds in with top pair on a jack-high flop only to run into the pocket kings of Nathan Watson.

A steady stream of bust-outs followed with Thomas High falling in 10th place to set the final table. High shipped it in with pocket fours and couldn’t get there against the eights in the hand of Waheed Ashraf.

Rob Binkley busted in ninth-place. Binkey lost all but two big blinds to Justin Devonport and failed to recover.

David Johnston joined Binkley on the rail before Devonport lost a flip with sixes against Winsor’s ace-queen to reduce the player count to six.

All six surviving players were now guaranteed a five-figure haul for their investment. Garry Wilson was the first to collect this sized sum.

Wilson jammed 10 big blinds into the middle with queen-seven and Ashraf called with king-four. A king on the flop was enough to send Wilson to the cashier’s desk to collect £11,180.

Warburton’s executioner, Watson, fell in fifth-place. Ace-deuce was the hand he chose to commit his last six big blinds with. The hot-running Winsor called with ace-eight and there was no way Watson was winning that hand, not in the form Winsor is in right now.

Dobson then doubled through Ashraf with pocket sevens against jacks, courtesy of the board four-flushing with diamonds.

That hand may have rocked Ashraf because he was the next player out. He pushed all-in for 13 big blinds with ace-jack and that man Winsor put him at risk of elimination by calling with king-queen. Ashraf’s hand remained best on the flop and turn, but a king on the river sent him to the showers.

Dean Perry held a substantial chip lead when play was three-handed but quickly went from hero to zero.

Perry lost a large pot to Dobson before he shoved 22.5 big blinds into the middle with pocket sevens. Dobson woke up with aces in the hole. They held and heads-up was set.

Winsor doubled early into the battle, prompting the players to pause the clock and discuss a deal. A deal was struck that saw Dobson lock up £72,000, Winsor £68,000, leaving £3,510 for the eventual champion.

The tournament was all over 25-minutes after the one-on-one clash began. With blinds now 60,000/120,000/120,000a Winsor jammed for 2,000,000 with ace-five and Dobson opted to flip with his pocket deuces. The ten-seven-four flop kept Dobson ahead. Dobson turned a set, but Winsor still had outs to a Wheel. They never arrived as the river bricked and Dobson became the 2020 GUKPT Manchester champion.

Next up for the 2020 GUKPT is a journey north of the border to bonny Scotland, Edinburgh to be exact. The Main Event in Edinburgh is £560 buy-in with £100,000 guaranteed to be won.

The Luck of The Sevens is Yours – 777 Casino Welcome Package

Making Your First and Second Deposit at PlayAmo is Worth It