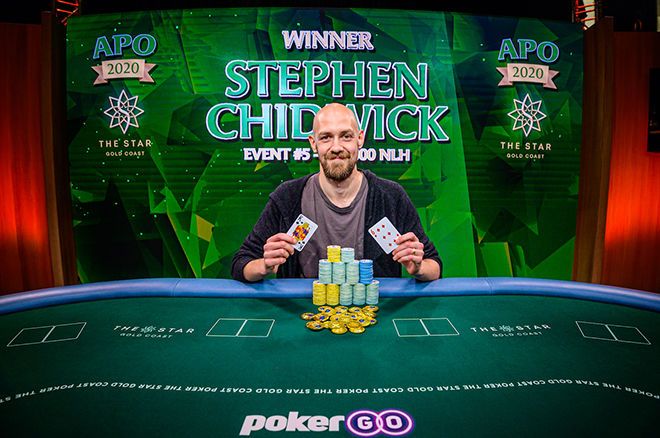 Stephen Chidwick has climbed to sixth in the all-time money listing after winning yet another major live Super High Roller tournament. Chidwick triumphed in the A$25,000 No Limit Hold’em event at the 2020 Australian Poker Open to bank A$399,500 ($269,852). The impressive victory takes Chidwick to $33,888,888, enough to leapfrog David Peters on the earnings leaderboard.

The controversial David “Chino” Rheem was the unfortunate soul who burst the money bubble, paving the way for the surviving seven players to lock up at least A$58,750 ($39,684).

Austria’s Matthias Eibinger was the first player to collect some prize money. Eibinger busted at the hands of the legendary Erik Seidel, his elimination also brought the curtain down on Day 1 proceedings.

The final six gathered under the glare of the PokerGO cameras and locked horns from the get-go. Colombian star Farid Jattin, who won the A$25,000 Pot-Limit Omaha event a couple of days ago, fell in sixth-place on the first all-in showdown of the day. Jattin’s ace-ten failed to get there against the sixes of Australia’s Michael Addamo and the player count reduced by one.

Watch Some SHR Action While Enjoying a $600 Bonus

Dutchman Jorryt van Hoof was the next to bust, doing so at the hands of Seth Davies. Davies had managed to fade 19 outs on the turn and river to double through Addamo so had enough chips to dispatch van Hoof.

It was something of a cooler that sent the player from the Netherlands home in fifth-place. He jammed with jacks and ran slap bang into the queens of Davies. No more knaves appeared and van Hoof was gone.

Addamo busted next when his king-eight lost to the dominating ace-king of Davies. It was a huge pot because Chidwick also called in an attempt to bust two players simultaneously. That plan fell flat on its face and Davies scooped a substantial pot.

Davies now held a significant chip lead but no-limit games can and do change in an instant. Chidwick doubled through Davies before getting his hands on the rest of his American opponent’s chips. Davies’ ace-five stayed in front of the king-nine of Chidwick until the river when the British superstar improved to a diamond flush.

This gave Chidwick an eight-to-one chip advantage over Seidel and the writing was on the wall. A short-stacked Seidel committed the last of his chips with the powerhouse hand that is pocket queens and Chidwick looked him up with king-six. A king on the flop was enough for Chidwick to sample the sweet taste of victory once again.

There’s no doubting Chidwick is one of the best poker players to have ever had cards pitched to them. He’s an absolute beast when it comes to any variant and format.

The Super High Roller specialist has a phenomenal record in Poker Open events. There have been 33 total Poker Open events since the tour’s creation and Chidwick has reached the final table on 15 occasions, winning six of those.

Chidwick now has total lifetime winnings weighing in at $33,888,888 and is less than $3 million away from climbing above Dan Smith in fifth-place who has $36,742,718. With Chidwick playing as many big events as he does, nobody sane would bet against him hauling himself into the top five before 2020 ends.

Why Castle Builder Is The Best Online Slot You'll Ever Play

Balls of Fury: It's Time for Some Furious Fun!