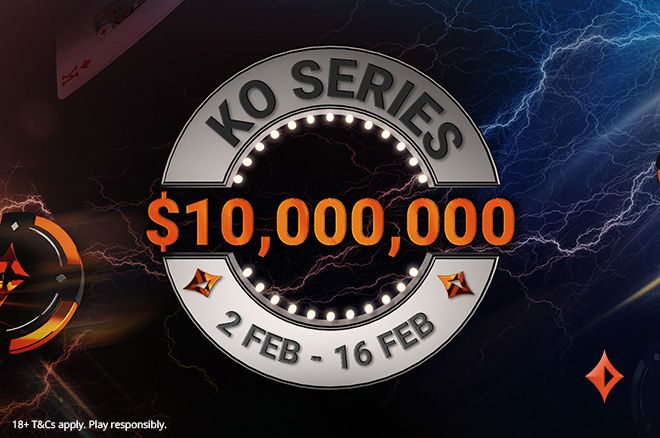 February is a fantastic month if you’re a fan of progressive knockout tournaments because PokerStars has its Bounty Builder Series and partypoker is running its famous KO Series.

This latest edition of the partypoker KO Series runs from February 2-16 and brings with it 230 tournaments with combined guaranteed prize pools in excess of $10 million.

Each of those 230 tournaments is a progressive knockout (PKO) event, meaning players don’t have to reach the money places to see a return on their buy-in.

With more than 200 tournaments on the schedule and over $10m in guarantees — this is the best poker you can play in February.

Each of the 230 tournaments are split into different buy-in categories to give more players the chance of becoming a KO Series champion. You’ll find:

There are KO Series events to get your teeth into regardless of your bankroll and the budget you have set for your poker games in February.

There are several different formats to enjoy too. These include 8-Max, 6-Max, mix-Max 8-6, Mix-Max 6-4, Battle, and even Pot-Limit Omaha PKO tournaments.

Eight Main Events are scheduled throughout the fortnight of KO Series. Four 8-max no-limit hold’em and four PLO events are on the cards.

Every tournament is packed with value but four NLHE and four PLO events take place every day at 8:30 p.m. CET and 9:30 p.m. CET respectively that you cannot afford to miss.

Poker coach Gareth James explains why your shoving ranges need to change in a bounty tournament.

What is a PKO Tournament?

PKOs are all the rage right now because they add a different dynamic to a typical cash tournament.

Half the buy-in goes into the main prize pool, which is awarded in a standard fashion. The other half is placed on the heads of each and every player in the PKO tournament.

Should you be the last player standing, you win the first-place prize and your own bounty, which is usually pretty substantial by this stage.

Are partypoker’s PKOs Different to Elsewhere?

Most PKOs are the same wherever you play them online. partypoker has two major differences to set them apart from the opposition.

Satellites for KO Series are available right now from the bargain price of $1.10. You can also win tournament dollars from their respective satellites and use them for any KO Series, or any other partypoker tournament for that matter.

SPINS players can jump into KO Series edition SPINS, partypoker’s take on jackpot sit & go tournaments. These only cost $5.50 to enter and have a top prize of a $2,100 KO Series ticket.

Register on partypoker to get up to £40 worth of SPINS tickets!

Join The Frenzy at Ladbrokes Casino – Take a £50 Welcome Bonus