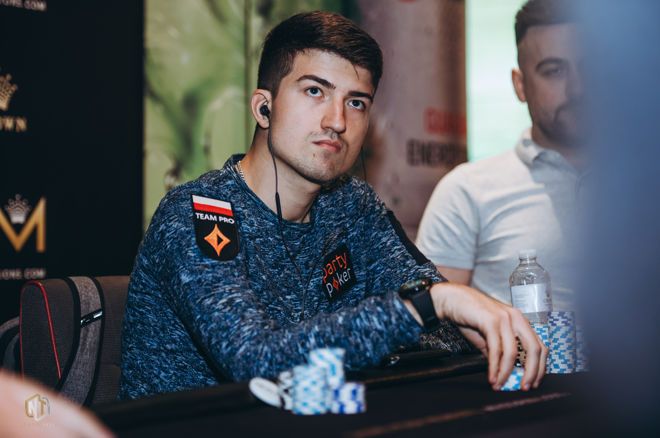 This was yet another deep run for the Polish player at the Aussie Millions, but he finally takes home a ring to call his own. After a third-place in the 2017 $5,000 Pot Limit Omaha and a second-place two years ago in the $1,150 Turbo Shot Clock, Urbanovich took down the tournament shortly before midnight local time to close in on US$6 million in lifetime earnings.

Meanwhile, runner-up Sitbon followed up a third-place finish in the $2,500 No Limit Hold'em last year with a second-place in this event, in only his second year attending the Aussie Millions.

"Melbourne is my favourite place to play," Urbanovich told PokerNews. "I've never had a ring, never won a tournament in Australia. It's perfect. I've actually never even cashed a mixed tournament here every year I've come, so nice to get my first cash in first place!

"I liked the field, it was pretty good. I'm going to carry on from here and play as many Aussie Millions events as I can while I'm here."

The Aussie Millions H.O.R.S.E. event has a long list of well-known winners and continuously attracts some of the world's best Mixed Game players, with this year being no exception. Despite this year's field falling short of the 2019 figure, there were still plenty of big names in attendance including Rob Campbell, Phil Hui, Joe Hachem, Bryce Yockey, Benny Glaser, Billy 'The Croc' Argyros, and Oliver Gill.

The tournament played down to a final table of eight yesterday, with just six players guaranteed to cash.

At the start of the final table, it was Alan Wilson who was the short stack, but former Main Event champion Ari Engel became the first elimination, bringing the tournament to the money bubble a little over an hour into the day.

Vasco Zapantzis had moved into the chip lead by this point, with start-of-day chip leader Jan Suchanek and Urbanovich not far behind them.

Eventually, it was Simon Chahine who would bubble in seventh, guaranteeing the remaining players A$6,615. Start-of-day short stack Wilson was next to go, working his short stack into the money.

Urbanovich had chipped up to around 200,000, and was almost level with Zapantzis with five players remaining. Rainer Quel was looking to go one better than his 2017 runner-up finish in this event, but would have to settle for fifth place and A$7,560.

Start-of-day chip leader Jan Suchanek went next, becoming the first recipient of a five-figure score, and a quick evening looked in the offing as Zapantzis exited in third.

Sitbon came into heads-up with just over 516,500 chips compared to Urbanovich's 113,500, but any prospect of a quick victory for the Frenchman was thwarted by the Pole who battled to stay in the tournament.

Twice in quick succession, Sitbon rivered meaningful pots in Omaha Hi-Lo, rivering a low to scoop with just a pair of nines, and then three-quartering his opponents after both rivered the nut straight which served as a low, with Sitbon having turned a full house.

However, Urbanovich battled back and as the blinds and limits steadily increased, he would jump back into the chip lead after flopping a straight in Limit Hold'em. It was a topsy-turvy affair which had just 15 big blinds in play by the end.

The final hand was in Seven Card Stud, as Sitbon got it in with short-stacked with Jacks on third street. Urbanovich had made kings up on sixth street, and despite peeling his final card, Sitbon couldn't find a miracle card and the Pole secured victory.