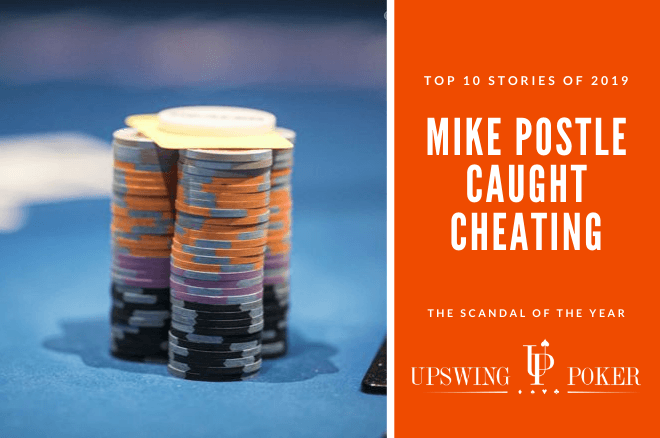 This year’s Top Stories are brought to you by Upswing Poker. Find free articles, quizzes, and resources that will help you take your game to the next level now on upswingpoker.com.

When Scott Van Pelt picks up a poker story for one of his "SportsCenter" segments, it has officially hit the mainstream.

That's what happened when arguably the poker story of the year blew up this past October.

Before that, Mike Postle was a name known only to a small group of regulars paying attention to the cash game scene at Stones Gambling Hall in Citrus Heights, California, just outside of Sacramento.

When the story began spreading like wildfire through media both mainstream and social, the Mike Postle cheating scandal dominated poker conversation like few topics in the game's history.

When anyone in the poker industry looks back on 2019, the first thing they'll recall is the saga of Postle and his god-mode performances on live stream at Stones.

The Whiff of a Cheat

The Mike Postle cheating scandal started, publicly at least, with a tweet.

Privately, Veronica Brill had been dogged by suspicions for months. She'd aired those suspicions with a select few, including higher-ups at Stones.

How was it possible for Postle to win so much, so consistently, with such staggeringly perfect play?
His moves and instincts were positively superhuman. Eights full versus tens full in a small pot on the river? Postle just called a bet.

Facing heavy action in multi-way pots when nobody had a nutted hand? Postle boldly blasted in a bluff to win the pot.

In a vacuum, perhaps one or two could be explained away. Connect the dots, though, tack all the clues to a corkboard like a TV detective, and the circumstantial evidence all pointed the same way: something stank at Stones. And Brill seemed to be the only one smelling it.

So, she did what any sane person with a scandal story in poker does in 2019. She contacted Joey Ingram.

Ingram on the Case

Brill reached out to Ingram and told him she was ready to go public. She'd been rebuffed in her attempts to get Stones higher-ups to see Postle's rampant thievery, but she had put together a little "highlight tape" of Postle's play that she was ready to release on YouTube.

Ingram had actually been invited to Stones a couple of times to do commentary but he never had any interest in making the trip.

"This dude was just playing in a way I've never seen anybody play."

"It didn't really make much sense to me," he said of his initial reaction to Brill reaching out. "I didn't really think much about it."

When Brill's video came out a week later, Ingram took a look and found himself instantly hooked.

"I saw this dude was just playing in a way I've never seen anybody play," Ingram said.

He fired up a live stream for his fans, and they painstakingly combed through every hand Postle played over the course of a five-hour streamed cash game at Stones. Ingram had selected the stream at random, and he happened to choose one of the first streams in which Postle's god mode had been toggled on.

Had he selected a stream from just weeks earlier, the show would have wound up rather boring.

Ingram had already seen enough to make him suspect Brill was onto something, but he wanted his followers to watch with him as a sort of sanity check.

While Ingram and Brill are widely credited with disseminating everything to the poker world, Ingram pointed to the helping hands of two high-profile players as well.

When Haralabos Voulgaris and Scott Seiver got a look at the video and began tweeting about the situation, Ingram said everything blew up and "it was on."

The streams continued for the next several days. Ingram knew he was on the story of his life and he determined that he wouldn't let up. He went more than a week straight without a break, four to six hours every night.

"The guy's adamant he didn't do anything."

While many initially preached caution, public opinion turned in a hurry. Those on the fence quickly turned on Postle when evidence mounted, as Ingram and Co. uncovered damning hand after damning hand.

When forum-goers crunched the numbers after grinding through the streams, they estimated Postle had cleaned the games at Stones out to the tune of around $250,000 despite playing mostly $1/$3 and $2/$5 games.

That win rate put him so far off the scale into outlier territory that it left little doubt something untoward had happened — at least to most observers.

Doing his due diligence, Ingram managed to get a hold of the man himself.

"He was very courteous," Ingram said. "The guy's adamant he didn't do anything."

Postle also vociferously defended himself on Twitter, saying he's played a "unique high-variance style" his whole career and been a winner for over a decade.

The tweets have since been deleted and Postle hasn't gone on the record with any outlet other than appearing on Mike Matusow's "The Mouthpiece."

Matusow made much contrarian noise on Twitter when others vilified Postle, and whether that was a factor or not, Postle appeared on the show.

Postle stuck to his guns despite the mounting evidence, again blaming the accusations on jealous haters. He denied winning anywhere near $250,000 and said he was "10,000%" innocent.

Naturally, the internet sleuths and content creators and forum lurkers took Postle at his word, and the story ended there.

No, what actually followed was one of the deepest internet dives since the release of "Making a Murderer." Ingram and his posse of detectives put their heads together during his streams and in a lengthy TwoPlusTwo thread.

Several questions remained unanswered. How long had the cheating gone on? Could legal action be taken? And chief among them: how exactly had Postle pulled this off?

Onlookers tossed around theories and dissected minutiae in the hundreds of posted live-streamed games at Stones.

General consensus eventually settled on Postle somehow having access to the live hole card feed via his cell phone. Internet sleuths uncovered small details that seemed to point this way, with the most influential being a still that showed a blue screen, one that looked similar to the one displayed on the stream graphics back end.

The truth hunters even detected tiny changes in Postle's clothing, the most suspicious being an apparent lump in his hat that some theorized was a communication device.

By now, suspicion about possible accomplices abounded, and investigators dug into the backgrounds of Stones employees. Possible connections were explored, but no smoking gun ever really emerged.

"Obviously, you never see anything like this where a guy's cheating on a live stream, laughing in these dudes' faces and grabbing his dick."

Nonetheless, Ingram and his "team" dove into every possible avenue of the story, turning the live stream videos and other relevant internet sources into a "Holes"-like landscape of pockmarked wasteland. No second was left unwatched by the masses, in case that was the second Postle slipped up and revealed the telling clue.

"My mind was so warped," Ingram said. "I was thinking about the story 24 hours a day.

"I don't think interest really waned, honestly. It was growing and growing and growing. There was people that were still extremely interested in there. It's just a matter of finding a different angle. I think it was the biggest month on my channel ever."

The Mainstream and the Courtroom

Eventually, Ingram wasn't alone covering the saga. The story broke out of its poker glass ceiling as mainstream sources picked it up, with the peak undoubtedly coming when ESPN anchor Van Pelt released a three-minute take during his Oct. 4 "SportsCenter."

"If a guy showed up to play pickup basketball and never, ever missed a shot for a couple of years, wouldn't he go play in the NBA?" Van Pelt asked.

"If you're some sort of poker god who never lost, who made the right call or fold virtually every single time...if you were this good, why would you be playing in games only with a video feed at a $1/$3 table in Stones poker room? Why wouldn't you be in Vegas winning all the money in the world?

There might be perfectly reasonable explanations and answers for all the questions the poker world is asking. They'd love for that to be the case. And if those answers exist, they'd really love to hear 'em,"

Everyone following the story still awaits those answers.

"If you were this good, why would you be playing in games only with a video feed at a $1/$3 table in Stones poker room?"

One key moment many had awaited arrived about a week after the story broke. Postle and Stones were both named parties in a $10 million civil lawsuit filed by Mac VerStandig on behalf of Brill and the other wronged players. The suit hinted at a potential accomplice with an unnamed "chief confederate" charged in what the suit billed as "the largest known cheating scandal in the history of broadcast poker."

Postle's lawyer hinted he'd build a defense based on Postle's winnings being within the realm of reason.

"When I play, I lose almost every hand, so I know such streaks are possible," he said.

Despite the potential for the case to make the cheated players whole and provide investigators with some closure, no further details have emerged in the intervening months.

A Slice of Poker History

For Ingram, the Mike Postle case represented a chance to document a unique piece of poker history in a style all his own.

He remembers the coverage of the Ultimate Bet superuser saga as "discombobulated" and hopes those looking back or curious about Postle someday can simply scroll through his videos and get a coherent sense of the story, with all its twists and turns.

In all his hundreds of hours of content across several years time, Ingram can't recall a story anything like the Postle case. Asked what it compared to in his career, the only thing he could come up with was when he dove into some UFC content after Khabib Nurmagomedov infamously jumped out of the cage to instigate a postfight brawl after beating Conor McGregor. Ingram's subsequent breakdown is approaching 20 million views.

None, however, reaches the level of the Postle saga.

Neither had the poker world, and that's why this incredible story will be remembered as one of the biggest of the year.

Upswing Poker’s resources will help you take your game to the next level, no matter how much or how little poker you’ve played. Take a poker quiz now to challenge and improve your poker skills for free.