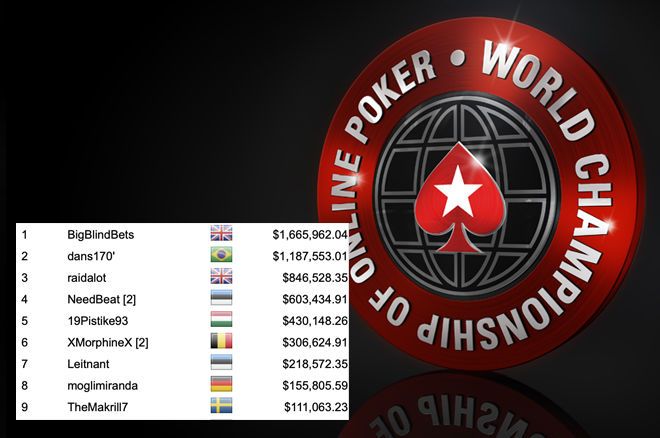 High stakes cash game regular “BigBlindBets” is the latest PokerStars World Championship Of Online Poker Main Event champion. He came out on top of a star-studded field to get his hands on $1,665,962 and a place in poker’s history books.

BigBlindBets began playing online poker recreationally in 2010, mainly focussing on freeroll tournaments, $0.02/$0.05 cash games, and sit & go tournaments with friends, according to a post he made on PokerMarket. In 2011, he set himself a challenge to reach 100NL. He began taking the game more seriously progressing to $1/$2, stating he was “making many cans of baked beans a day.” BigBlindBets now has enough money to start a baked bean factory after banking more than $1.66 million and a WCOOP Main Event title.

Sweden’s “TheMakrill7” was the first player to bust from the nine-handed final table; the Swede banked $111,063 as a result. TheMakrill7 was joined on the rail by Germany’s representative “mogilmiranda” whose eighth-place exit saw them haul in an impressive $155,805.

The first of two Estonian grinders, “Leitnant”, was the next to fall by the wayside. Seventh-place is as far as they progressed, a result yielding $218,572.

Each elimination boosted the payouts by a significant sum. Belgium’s “XmorphineX” ran out of steam and fell in sixth-place for $306,624. This WCOOP was one to remember for the Belgian after they triumphed in the WCOOP-13-M: $530 NLHE Sunday Million SE earlier in the series for a $202,421 prize.

Hungary’s “19Pistike93” saw their tournament come to an abrupt end in fifth-place, although the $403,148 they collected will go some way to numb the pain. This left only four players in the hunt for the title and the mammoth-sized first-place prize.

Those four became three when the second Estonian player lost their stack. A career-best score of $603,434 was awarded to “NeedBeat” who made the most of their second bullet in this event.

All eyes were now on Talal “raidalot” Shakerchi who was looking to write himself into poker history. A victory in this event would see Shakerchi become the first player to win both a SCOOP and WCOOP Main Event. Sadly, for Shakerchi and neutrals, that never happened as the former hedge fund managed busted in third-place.

According to the PokerStars Blog, Shakerchi raised with king-jack of clubs and BigBlindBets three-bet with ace-jack of hearts. Shakerchi responded with an all-in four-bet and was called. BigBlindBets was more than an 80-percent favorite to win the hand and send Shakerchi to the rail.

BigBlindBets held a massive 485 million to 70 million chip advantage over Brazil’s Danilo “dans170’” de Lima Demetrio. Both players were guaranteed more than $1.1 million, but an additional $478,409 awaited whoever took down the tournament.

The final hand saw Demetrio limp-call a shove with ace-king of diamonds to find himself up against the dominated ace-deuce of spades in the hands of BigBlindBets. When you run good, you run really good as BigBlindBets improved to a spade flush on the river to bust his Brazilian opponent in second-place.

BigBlindBets’ victory was the twenty-eight title from a player calling the United Kingdom home. It was enough to tie matters at the top of the countries leaderboard with Russia.

Five other countries won at least 10 WCOOP events each. Finland (10), Canada and Germany (13), Netherlands (14), and Brazil (23) being those high-flying countries.

Finland’s Jussi “calvin7v” Nevanlinna came out on top of the overall WCOOP leaderboard, netting himself $20,000 cash and a commemorative trophy. The Finn amassed 1,400 points, 55 more than Filipe “zagazaur” Oliveira.

The Stars Group is a majority shareholder in iBus Media