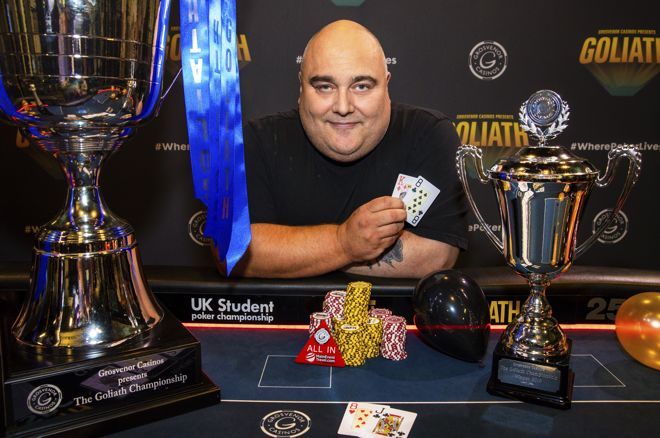 When the 2018 Grosvenor UK Poker Tour (GUKPT) Goliath attracted a field of 7,584 entries to become the largest-ever live poker tournament held outside of Las Vegas, nobody thought that record would be broken for a long time. Those people were wrong because the 2019 Goliath saw an incredible 9,300 entries processed and a £911,410 prize pool created for a £125 buy-in.

By the time the nine-handed final table was reached, the players were guaranteed £11,850.

Alan Watkins was the first to fall and he collected £11,850. Watkins was joined on the sidelines by Matthew Wright whose £13,670 is the largest prize he’s won in the live area.

Next to bust was Trevor Howard whose Hendon Mob page was completely empty until he finished seventh for a cool £16,405. Howard found some more company on the rail when Igors Puskarskis busted out in sixth-place for £20,965.

A Five-Handed Deal is Made

With Puskarskis out of the way, the final five players paused the tournament clock and discussed a deal for the remainder of the prize pool, of which £339,620 was still up for grabs. A deal was agreed upon that locked up at least £60,887 and as much as £80,548, a fantastic return on a £125 buy-in.

Christopher Bartlett then fell by the wayside and collected £69,893 for his fifth-place elimination, capping off a great week that also saw him cash in the £225 buy-in National 25/50 event for £1,340. Derek Borwick then busted and secured £63,691.

Romania’s Cristian Tamas then banked £80,548 after his epic run ended in third-place, setting up a one-on-one battle between Tom Jones and Lee Reynolds. Jones ran out of steam and fell at the final but took home £60,887 for his valiant effort, his first recorded live cash for three years.

The man of the hour was Reynolds whose previous largest cash weighed in at only £340. Now Reynolds can brag of a £64,601 haul and will forever be known as the 2019 GUKPT Goliath champion.

Get 200 Free Spins at PlayAmo Casino - Every Week!