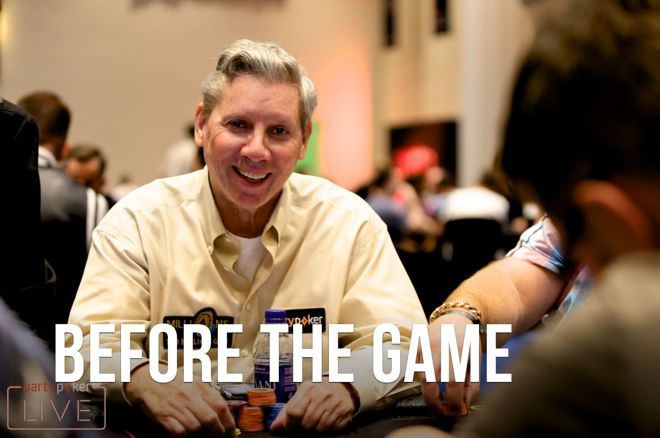 In Part One of Mike Sexton’s story, we heard how the partypoker Chairman took up the game of poker after a youthful post in the army and teaching ballroom dancing. But there’s no quickstep like the ones required at the poker table, and Sexton was on the cusp of a change in career. It would start with an ending, of sorts.

“When I got divorced, I made a decision to quit the job and concentrate on the poker games. I loved it so much, I made money at it. I just wanted to be happy in life. I thought that if I went broke, I could always go and get another job. I didn’t get a paycheck for the next 25 years. It was a decision that was good for me.”

Suddenly, he was looking forward to working at the poker table, and it was getting easier and easier to win money as he improved.

“I never got tired of playing poker. When one game broke up, I couldn’t wait ‘til the next day to get back to the next game. I played in the bible belt of North Carolina for eight years before I moved to Las Vegas. I’d gone to Las Vegas a few times a year because I had good friends who’d made it big out there, like Daniel Robertson and Chip Reece."

He remained a resident of North Carolina where he played in home games and ran his own twice a week. But in 1984, his first trip to the WSOP in Las Vegas prompted a move. With WSOP events starting every other day and cash games and satellites in between, Sexton went with the plan of playing in three events.

"I thought that if I went broke, I could always go and get another job."

"I went out there for a week, played three [events], made two final tables and because of the success I had the very first time I played the World Series, it led me to move to Las Vegas.”

From North Carolina to Las Vegas, Sexton went. And with his move proving to be a huge success, he started building the legend we now know.

“I was never going to miss another World Series and thought that if I was going to be a poker player, I should live in Las Vegas. I moved out there in January of 1985 and I’ve been out here ever since. I’ve never missed a World Series of Poker.”

Cashing In During the Poker Boom

Times have changed greatly since those days, of course. Along with the popularity of online poker, Sexton believes the game’s reach has been its greatest innovation, and he's been on hand to watch the transformation.

“The biggest change is how global poker has become now. Literally every country in the world has poker players and holds poker tournaments. For years and years, it was just ‘America’s game’. Literally no one from overseas came to the World Series. Then, in the early 1980’s, Terry Rogers brought a few guys over from Ireland. They were the first non-American players to play in the WSOP. Since then, it’s grown and grown and once TV and the World Poker Tour came along, it really caused the explosion of poker. It’s been phenomenal to see the global growth of the game.”

“I was never going to miss another World Series and thought that if I was going to be a poker player, I should live in Las Vegas."

Sexton’s maiden WPT Main Event win came in November 2016, and he admits that it was a thrill to win with the backing of all the people he’d worked with on the World Poker Tour for so many years.

“That [WPT win] was really great for me, because on the day of that final, the crew and staff of the WPT were pulling for me so hard to win. We fought a long heads-up battle and I was fortunate enough to come out on top, and now I get to take part in the Tournament of Champions. I started that in the 1990’s, so to be able to take part in that is very important to me."

Before that win though, Sexton had loads of other poker accomplishments under his belt, despite only starting to play no-limit hold'em tournaments in the early 1990's.

"I won back-to-back Main Events in 1996 and 1997 at the Four Queens in Las Vegas and in 2000, I won the biggest event in the history of Europe at the time, the Grand Prix de Paris. I’ve had my share of success. The first five times I played in the WSOP Main Event I cashed four times! I won the WSOP Tournament of Champions back in 2006. That had a million-dollar first place prize and I gave half that money to charity.”

Life has come full circle for Mike Sexton. But he still remembers those old army days, even half a century after they took place. It’s why that charity donation he spoke of was so important to him. He gives back to remember.

“I remember basic training like it was yesterday and it was 50 years ago that I was in the army. You just never forget it - those are fond memories going through jump school. I’m proud to have served and now I do all the charity events I can for Wounded Warriors and Paralysed Veterans of America because I so appreciate guys who make the ultimate sacrifice for us and serve overseas and serve our country.

"When I go to hospitals and see guys without legs and arms, you realize ‘It could have been me.’ I could have gone to Vietnam and gotten my legs blown off. Fortunately, it didn’t happen to me, but it could have. For those that that has happened to, you just feel their pain, appreciate their sacrifice and do what you can to help.”

Sexton looks back on his military service with evident pride. But it’s his dancing background that has led to a personal pledge to himself this year.

"Dancing, you can do that your whole life with your partner and I’m a believer that people who do it enjoy life more than those who don’t.”

“I’m not dancing much these days, but it’s one of my New Year’s resolutions. I want to get back into it because I really miss it. For a long time, I liked ballroom and swing dancing.

Sexton sees dancing as a great lifelong partner activity and mentioned the West Coast swing organization that hosts events in the western part of the U.S.

"There are so few things that you can do as a couple; they don’t really want to play golf or poker with their wives, they want to do that with the guys. But dancing, you can do that your whole life with your partner and I’m a believer that people who do it enjoy life more than those who don’t.”

Mike Sexton has been helping people since he can remember, but all of it seems to have been enjoyable to the man with the widest smile in poker. Like anyone with such a rich history in life as well as poker, he carries with him some terrific memories of his time... Before the Game.

Before the Game: Mike Sexton the Paratrooper (Part One)