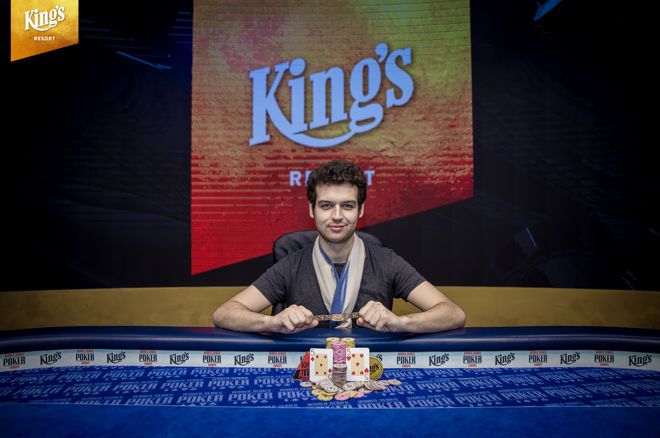 The 2018 World Series of Poker Europe has crowned another bracelet winner in the early morning hours and it was a familiar face taking gold at King's Casino in Rozvadov. A huge field emerged thanks to 133 total entries in Event #8: €25,500 No-Limit Hold'em Super High Roller, more than tripling the prize pool, and Australia's Michael Addamo claimed the bracelet for the second time in 2018.

This time, he and Germany's Christian Rudolph battled until almost 6 a.m. local time. A series of double-ups at the very end made for a rollercoaster experience with the better end for the Aussie and he recorded his best result on the live circuit for €848,702.

Rudolph reached his third WSOP final table in two years and narrowly missed out on his maiden bracelet, but collected a consolation prize of €524,532 for his efforts. The 2017 WSOP Main Event 3rd place finisher and last year's runner-up of this very event, Benjamin Pollak, had to settle for third place this time around. Among the other finalists were Mikita Badziakouski, four-time WSOP bracelet winner Dominik Nitsche, Winfred Yu, James Romero and German High Roller regular Manig Loeser.

“I definitely gonna catch up on some sleep now,” a visibly exhausted Addamo said in the interview with Czech media.

Having just arrived at King's Casino prior to the start of this event, Addamo bagged the chip lead on Day 1 on a couple hours of sleep and went on to add a second WSOP bracelet to his collection.

With this victory, Addamo will boost his cashes on the live circuit to more than $3 million and becomes the third Aussie to win multiple bracelets. Following into the footsteps of Hanh Tran and Timur Margolin, he also becomes the third player in just eight events at the 2018 WSOPE festival to win a WSOP bracelet in Las Vegas and Rozvadov in the current year.

Action of the Final Day

Even before any cards were dealt on Day 2, the €25,500 High Roller had surpassed the 113 entries of the previous year and another nine new entries boosted the field to 133 entries in total, making it the biggest high roller of that buy-in in Europe in the current year thus far. The prize pool of €3,158,750 more than tripled the initial guarantee, and the top 20 spots were set to see a return on their investment.

Among the early casualties were Liv Boeree, Michael Soyza, 2013 WSOP Main Event champion Ryan Riess, Adrian Mateos and Christoph Vogelsang. Riess lost a flip with pocket jacks against the ace-king of Loeser, who immediately spiked a king on the flop. It wasn't a lost day for Riess, however, as he jumped into the €10,500 Turbo High Roller and defeatedOgnjen Sekularac in heads up for €178,582 in a field of 56 entries.

Many other regular faces of the European and international high roller circuit were still in contention including former WSOP bracelet winners Igor Kurganov, Johannes Becker, David Peters, Chris Ferguson and defending champion Niall Farrell. However, none of them made it to the money. Farrell was eliminated just before the three-table redraw when his jam with seven-six suited was called by Fabrizio Gonzalez out of the blinds with ace-jack. Gonzalez turned a better pair and rivered the nut straight for good measure.

Two-time WSOP bracelet winner Kristen Bicknell was ousted just shy of the money bubble when her king-nine failed to connect with the board against the pocket jacks of Rainer Kempe. The money bubble then burst in spectacular fashion on the outer tables. Loeser jammed into Gonzalez in a battle of the blinds and the Uruguayan called for 26 big blinds with ace-jack. Loeser only held ace-deuce, but a deuce on the flop left Gonzalez empty-handed.

Gianluca Speranza, Sylvain Loosli and Pavel Binar ran out of chips before the next redraw and Czech master of speech play Martin Kabrhel fell in 16th place. Joni Jouhkimainen failed to hold up with ace-ten suited and the flopped nut flush draw, as Mikita Badziakouski got there with ace-six when he missed out on the open-ended straight draw and rivered a six instead.

Swiss businessman Asaf Berman, Kempe, Vladimir Troyanovskiy and Jean-Noel Thorel all missed out on a spot on the final table. Troyanovskiy was all in with ace-king suited against the pocket kings of Rudolph and flopped an ace, but the case king appeared on the river. The field combined after an even more spectacular three-way all in on the outer table. Timothy Adams was poised for a triple up with pocket kings against the queen-jack suited of Matthias Eibinger and the pocket queens of Pollak, but the last queen appeared on the flop to deny the Canadian a shot at a second WSOP bracelet for now.

Action of the Final Table

After the double knockout on the final table bubble, Pollak held court at the top of the leaderboard with almost two times as many chips as Rudolph in second place and the remainder of the field had very similar stack sizes.

Loeser was the first to bow out when he open-shoved with king-eight out of the small blind. Winfred Yu looked him up out of the big blind with ace-eight suited and flopped top pair. Loeser had some outs with a gutshot, but ultimately found no help to become the first casualty.

Rudolph, who had been responsible for several eliminations on the feature table previously, continued his run-good and sent James Romero to the rail next. Romero ended up all in and at risk with ace-ten, but Rudolph had little to fear with the dominating ace-queen on a nine-high flop.

The action didn't slow down as two further players were eliminated in quick succession. In a three-way pot, Yu flopped the nut flush draw and went with it only for Rudolph to snap-call with pocket nines for top set. Yu turned an additional straight draw, but the river was a blank. Dominik Nitsche, who won his fourth WSOP bracelet in Rozvadov one year ago in €111,111 No Limit Hold'em - High Roller for One Drop, also fell victim to the hot run of countryman Rudolph and lost a flip with ace-jack against pocket eights.

What followed was a stalemate that turned into an endurance challenge until the early morning hours. Fortune favored Addamo when he was at risk preflop with king-nine suited against the ace-jack of Pollak, as the Aussie flopped a full house. The run-good of Addamo continued when he took on a short-stacked Badziakouski with ace-trey versus ace-five suited thanks to trips on the flop.

Addamo nearly got there from behind for the third time, but missed out on a wheel draw to double Rudolph with ace-trey versus ace-jack. Only a few hands later, Pollak was at risk with ace-queen suited against the pocket sevens of Addamo and ended up second-best to set up a nearly even-stacked duel for the gold bracelet past 4 a.m. local time.

Rudolph pulled away at the start but Addamo doubled into a commanding lead when he rivered a nine-high straight against the flopped six-high straight of his opponent. The fate of Rudolph seemed all but sealed when he was at risk right after with ten-five against pocket queens, but the German made two pair on the river.

A series of double ups for both players followed and eventually, it was a simple coin flip that decided over the final outcome of the tournament. Addamo held pocket fives and Rudolph was at risk with ace-seven. Memories of the 2014 EPT Barcelona Main Event final table with the infamous German rail and their “the seven always comes” returned, but this time no seven nor ace for that matter showed up to crown Addamo as the champion.

That wraps up a late night shift here at King's Casino in Rozvadov, but the penultimate event of the 2018 WSOPE is just a night's sleep away. Follow all of the action here on PokerNews from the main live reporting landing page.