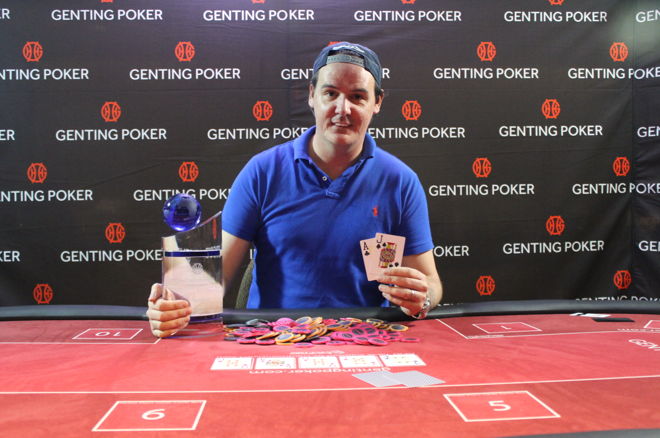 The curtain came down on the 2016 Genting Poker Series this weekend when the popular tour stopped off in the steel city of Sheffield and it was Dan Stanway who topped a field of 301 entrants to get his hands on the winner’s trophy and £31,700 in cash.

The final day’s play began with 15 players in contention for the title, but two and a half hours later, the nine-handed final table was set with former BMX pro Liam Batey leading the way.

Eighth place went to Aqeel Butt who called off his stack with ace-jack when Arren Khan moved all-in for 460,000 with what turned out to be ace-king. Both players paired their ace on the flop, but neither the turn nor river were jacks so Butt bust from the tournament as Khan’s king-kicker played.

Only a few minutes after Butt’s exit, Nish Hindocha fell by the wayside. Hindocha opened and Adam Daniel called. Hindocha then moved all-in for 300,000 chips on the three-five-deuce flop with ace-three and Daniel called with pocket sevens. A six on the turn was followed by a seven on the river to leave the tournament with only six players.

Those six became five with the elimination of Daniel. The chips of both Daniel and Khan went into the middle of the felt preflop, Khan holding ace-ten and Daniel the dominating ace-queen. However, a ten on the flop improved Khan to the best hand, which remained best through the turn and river to send Daniel to the rail.

Batey’s run then came to an end in fourth place. Batey committed his 640,000 stack with ace-eight and Khan looked him up with ace-queen. By the river, Khan had improved to a Broadway straight to resign Batey to an £8,800 consolation prize.

Almost immediately after Batey’s demise Bryan Moran exited in third place. Stanway shoved from the small blind with jack-ten and Moran called off his last eight big blinds from the big blind with queen-deuce. Moran stayed ahead on the king-king-five flop and the nine turn, but a queen on the river improved Stanway to a straight and sent the tournament to the heads-up stage.

It was Khan who went into heads up with a chip lead holding a 5,100000 to 2,400,000 advantage, But Stanway clawed his way back into contention before winning a massive 7 million chip pot when his pocket fours held against ace-jack with the chips going into the middle preflop.

That hand left Khan with only five big blinds and they went into the pot while holding jack-deuce and Stanway called with ace-jack. Neither player improved their holding. But Stanway didn’t need to as his ace-kicker was enough to bust Khan in second place and leave him as the last man standing in the GPS Sheffield Main Event.

There are 18 stops planned for the 2017 Genting Poker Series but the dates are yet to be released into the public domain. No sooner as they become available, UK & Ireland PokerNews will bring you that all important information.