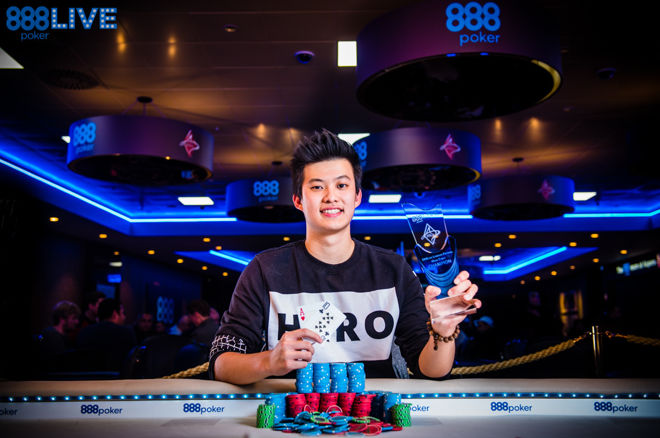 After an epic final day and action-packed final table, Ka Him Li has won the 888Poker London Live Main Event after beating Shah Raza heads-up for £45,300 and the glittering trophy.

Two friends from the cash game tables of London would meet heads-up for the biggest prizes they had won in their poker careers, but the final day action was fast from the start. The remaining 14 players were barely in their seats before Tony Doggett left in 14th place. He moved all-in for 14 big blinds, too, but his queen-high couldn’t catch Andrea Volpi’s ace-high and he started the exodus.

Over on the feature table, Philippe Souki had won a pot that would transform his tournament. A full house on the river with his pocket fours toppled Jose Lopez’ pair of queens and just a few hands later, Souki was the proud owner of a baseball cap proclaiming him a bounty-slayer. His pocket kings dealt with Kara Scott’s pocket tens after Scott’s lower pair was all-in pre-flop and Souki was chip leader.

Scott had busted in an unlucky 13th, but she wasn’t the only one leaving. Volpi and Triantipillou busted before Kevin Allen went in 10th, losing a coin flip to Enzo Del Piero to send play nine-handed.

The final table did not take long to heat up, with half the players knowing each other from two tables out. Enzo Del Piero was not around long, and unfortunate to be all-in and at-risk with two-pair on the turn against a better two pair for his eventual conqueror, Ka Him Li.

It was a longer time to wait than might have been expected for the next elimination, but when it came, Jose Lopez made the right move, but walked into a cooler. His late-position shove with ace-jack was crushed by Shah Raza’s pocket aces and they held to eliminate the Spanish player from the final table after sweating a straight draw on the river.

Two players busted in quick succession soon after, with Mikhail Pokrepa very short-stacked and unlucky to bust when his all-in move with pocket queens was in the perfect spot to double through Cristian Mihu’s call with pocket sevens… until the seven on the flop, that was. Charles Chattha was the shortest left, and his final thirteen big blinds were all-in with ace-high, but Sam Grafton paired a jack on the flop to eliminate his friend and fellow British legend.

Five players were left, but that wasn’t the case for long. Romanian player Cristian Mihu left the table after he flopped the straight in a three-way pot with Sam Grafton and Ka Him Li. Li called Mihu’s shove with a set of threes which made a full house and we moved four-handed.

Down to four, Sam Grafton was the chip leader, but he lost an all-in against Shah Raza when the latter moved all-in from the small blind with ace-high, and Grafton called with king-queen suited. Grafton could find no help and Raza took what would turn out to be a critical lead.

Sam Grafton was short-stacked and needed to double, so when he shoved all-in on Ka Him Li’s big blind from the small blind, he was hoping for a call with a worse hand. Instead, he was dominated and was out after the board to join his entertaining rail. Philippe Souki was out directly after Sam Grafton's elimination when he moved all-in with pocket sevens and ran into Li’s eights.

Suddenly, the 21-year-old Hong Kong-born player Ka Him Li was heads-up and with a 3:1 chip lead. However, that didn’t last. Shah Raza moved all-in with pocket eights and was called by Li’s ace-high. The flop gave Raza a full house and a deal discussion saw Raza lock up £40,000 and Li, who had the chip lead, take £45,000.

They would play on for £300 and the trophy and it didn’t take long for it to be presented. After a series of small raises and folds, Raza’s ace-eight was dominated by Li’s ace-ten and he rode out the board to triumph.

After four days of spectacular play, drama, and excitement, the 888Poker London Live Main Event champion is Ka Him Li, and he left with £45,300 and of course the trophy.