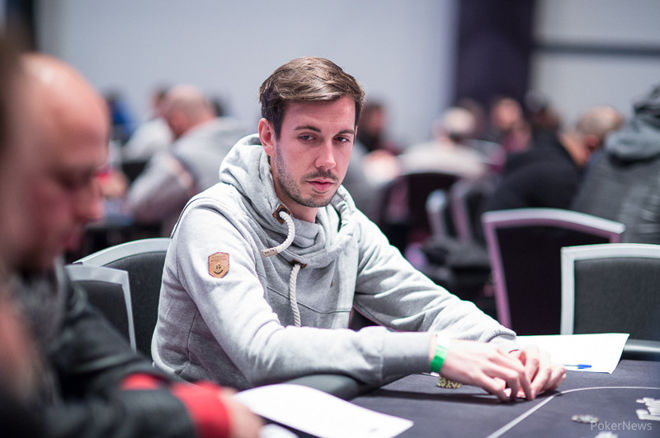 Jonas "llJaYJaYll" Lauck emerged as the World Championship of Online Poker $5,000 Main Event champion, taking home $1,517,541 for his efforts in defeating a 2,091-player field. Lauck is an accomplished live player as well, but this win alone is worth more than his $1.3 million in live cashes. No deal was made at the final table.

According to the PokerStars Blog, the final table began with "uknowProsky*" holding a wide chip lead with over 100 big blinds, about double the next-best stack of "Gambler4444".

Things began anything but promisingly for Lauck as his ace-king fell to the ace-queen of "Olorionek" when the latter spiked a queen on the river. Lauck was left with 2.8 million at blinds of 150,000/300,000. Shortly thereafter, Lauck got it all back when he was dealt aces against the queens of Gambler4444.

Queens did do the deed for "axtipitos_86", who used them to eliminate Finnish player "deadfizh" in ninth when the latter jammed over an open with nines and found no improvement from the community. Malta's "gorodski" fell shortly after that when he jammed about 10 big blinds with

and failed to get anywhere against the

The tournament flipped seven-handed when uknowProsky* went from chip lead to bust in seventh. First, Lauck doubled through him with aces against jacks. Then, Lauck finished him off in a race, making a club flush with

all in preflop against uknowProsky*'s fours.

"R_Scientist" of the U.K. ran into a nasty cooler when his kings were no good, after a preflop raising war that saw axtipitos_86 turn over aces. However, a king on the river sent the pot R_Scientist's way, and axtipitos_86 was left short and busted in short order, though he did manage to outlast Olorionek and take fifth, losing a race to Lauck eventually with tens against

That hand came after deal negotiations fell through and they commenced again with four left. Lauck was the one unwilling to agree to terms, as he asked for more than independent chip model (ICM) payouts. His refusal to bend his terms ended up being a fruitful decision.

from under the gun. 0409479 proved his executioner as he woke up with

and held on after a

flop. Lauck then won a flip with eights against the king-jack of R_Scientist and it was heads up between he and U.K.-based 0409479.

Lauck had about a 3-2 lead but the players were fairly deep with 0409479 having over 60 big blinds. The match took over an hour, as each player held the lead more than once. The players were nearly even when they got in a preflop raising war that ended with a five-bet shove from 0409479 holding

. Lauck had him crushed with

and a board of

meant victory was all but assured for the German. The tournament concluded one hand later and both players walked away with seven-figure paydays, while Lauck was crowned WCOOP champion.