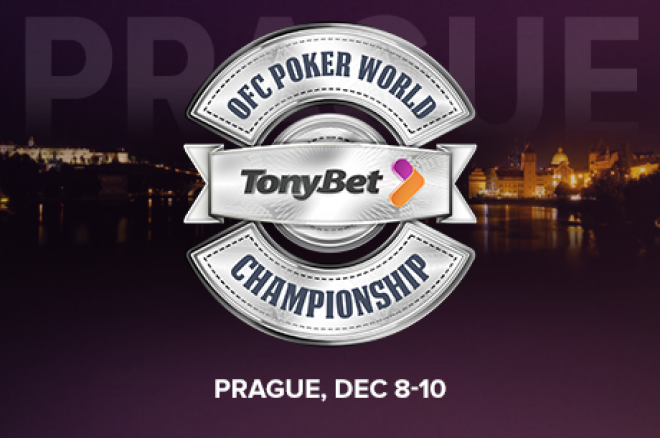 The Championship will include a two-day €1,000 Main Event, a "last minute" satellite with seats to the Main Event as a guarantee, and a promising $10,000 buy-in High Roller reentry event scheduled for December 8.

"We have decided to run an ambitious €10K High Roller event as per request from our top regulars, and we are expecting this tournament to draw a lot of big names from the poker community," a representative from TonyBet Poker told PokerNews. "It should become the open-face Chinese poker catwalk both in terms of player names and quality of the game."

Here's a complete look at the schedule of the TonyBet Poker's OFC Poker Live World Championship:

The event will be held at King's Casino in Prague's renowned Corinthia Hotel, and TonyBet Poker's live World Championship is set to become a cornerstone in the future of OFC live events and at the same time an exciting way to celebrate the room's first year of activities.

Launched by Lithuania's volcanic entrepreneur and current member of the European Parliament Tony G as "a present for the poker community," TonyBet rapidly became a must-stop for a good number of OFC poker lovers.

"The Championship will celebrate the incredible year that we had at TonyBet Poker, and we will make sure there's plenty of action for our players," the representative added.

In addition to the three events included in the Championship's official schedule, the two-day of OFC poker will also offer "many OFC cash games, as well as loads of presents and nice surprises for the players who will participate."

And attendance should not be an issue, as the World Championship will take place right during PokerStars Prague Poker Festival and only few days before the World Poker Tour National will contribute to turn the Czech capital in the center of the poker world for yet another December.

"Open-face Chinese poker is a fun and exciting game and it is growing incredibly fast," the site's representative explained. "Being the biggest global OFC poker site, we decided to seize an opportunity and give some live action for the players. And with the entire poker community coming to Prague in December, there’s just no better time and place to hold it. We are set to run the biggest live OFC event in history."

Qualifiers to the Championship's Main Event run daily on TonyBet Poker and offer everyone the chance to participate in the event for just a fraction of the buy-in.

If you don't have an account at TonyBet Poker yet, have a look at our in-depth review of the poker room and make sure you get yourself one from PokerNews, as this will award you with a 100 percent deposit bonus up to €500 and will give you access to a large number of PokerNews-exclusive promotions.

If you already have an account, simply open TonyBet's poker client and join one of the many satellites available.