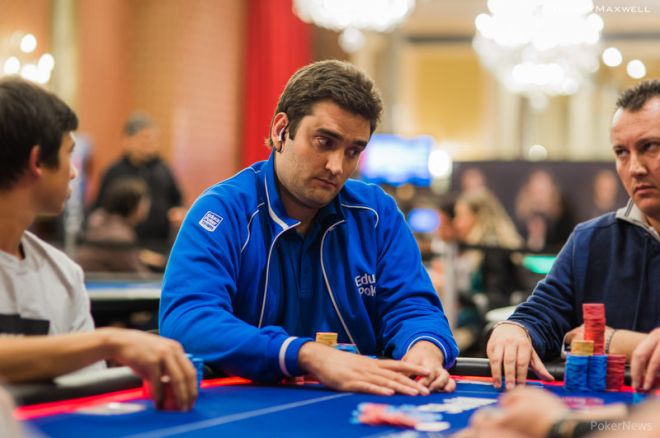 On Thursday, the remaining 115 players from a 556-player field returned to the Casino Sanremo nestled on the Italian Riviera for Day 3 of the 2014 PokerStars.it European Poker Tour Sanremo Main Event. After five 90-minute levels of play, the field was whittled down to the final 39 with Spain’s Raul Mestre and his stack of 942,000 leading the way.

James actually finished as the bubble boy in Level 16 (2,000/4,000/500) when Mitch Johnson opened under the gun with a min-raise. Action quickly folded to James, who was one of the shortest players still in the tournament. He shoved from the button for 30,500 total and both blinds quickly folded. Johnson made the call.

What started out as a fair fight would soon turn sour for James, as Johnson hit his set on the

flop. James needed runner-runner, but was left super thin when the

appeared on the turn. The

was run out on the river and James exited the tournament in 80th place.

The two Team PokerStars Pros mentioned both had interesting journeys in the EPT10 Sanremo. Ramdin finished his starting flight with a mere 9,200 in chips, but returned on Day 2 to work it up. By the end of the night he’d grown short again, but that didn’t stop him from finding his way to the money. Oppositely, Lodden has had chips to work with most of the tournament, but Day 3 just didn’t go his way.

Day 4 action is set to kick off at 12 p.m. local time, which is also when the €10,000 High Roller will get underway. The the PokerNews Live Reporting Team will be on hand in Sanremo to bring you updates from both. Join us then, but while you wait be sure to check out this video where Vanessa Selbst and Sorel Mizzi will give you some advice on pot-limit Omaha: