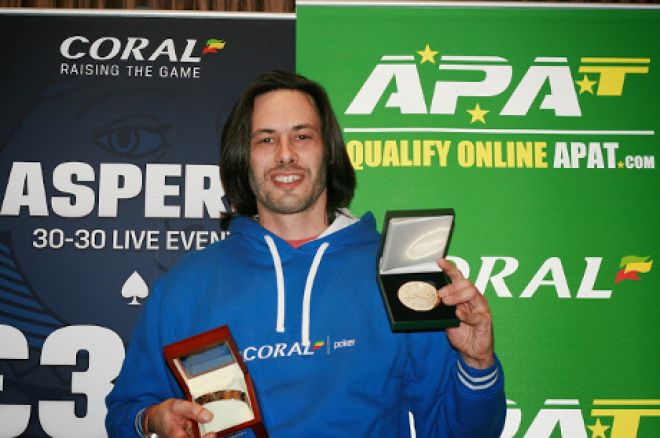 The APAT 2014 World Championship Of Amateur Poker (WCOAP) continued on Thursday with another two superbly structured tournaments, namely the Antes-Only and the H.O.R.S.E events.

As the name suggests, the Antes-Only event featured a structure that was void of blinds. Instead, the compulsory antes increased, as did the bring-in. The lack of binds crated some crazy action, with players opting to see many flops cheaply then try to take down the ever-growing pots with large bets.

Fifty players bought in for £55 meaning only the top six finishers received prize money for their efforts. That also meant that four of the ten players who reached the final table walked away empty handed despite having bragging rights of reaching an APAT finale.

Almost immediately after play at the final table began the players got a little more elbow room as the super-short stacked John Murray ran his pocket threes into the best starting hand in Texas Hold’em, a pair of aces. Those aces, which belonged to Rick Baker, held and Murray busted out.

Steve Jones was the next unfortunate soul to leave empty handed, hitting a set of eights on the flop but eventually losing out to Paul Grace’s king-high flush made with

Following Murray and Jones to the sidelines next was Chris Austin. The

after Ky Hutchinson jammed with

. The turn and river failed to improve Austin’s hand and he became the eighth place finisher.

Seventh place, and the unwanted title of bubble boy, went to J.P. Round who looked down at

and got his stack into the middle of the Aspers-branded felt. Grace called with

and Round’s chances of staying in the tournament were very slim indeed. They became so skinny you couldn’t even see them when Grace flopped a set of jacks. No runner-runner quad fours for Round and he exited in seventh place, leaving the remaining six players to enjoy the euphoria of cashing in an APAT tournament.

The first player to pick up some prize money was Paul Grace who found pocket jacks again, this time to call Hutchinson’s all-in bet. Hutchinson made his move with

and proceeded to flop two spades and complete his flush on the turn, sending Grace to the rail in sixth place, a finish worth £175.

. No help from the community cards from Baker and the final table was now the home to only four players.

Those four became three when Vincent Eley crashed out just after 10:30pm. The chips went into the middle on a

board, Eley holding an eight but Hutchinson the

. The river bricked and Eley exited.

Almost immediately after Elye’s exit, Pilgrim was eliminated and made his way to the cashier’s desk. Pilgrim’s shove with

was textbook stuff, as was Andrea Canli’s call with

. Both players paired their kickers, but it was not enough to save Pilgrim’s bacon and his tournament ended with another APAT medal.

The heads-up battle between Canli and Hutchinson went on for almost two hours before Canli opened to 24,000 and then called when Hutchinson announced he was all-in. It was one of tournament poker’s many coinflips as

.The tens of Canli stayed strong, busting Hutchinson and crowning Canli as the 2014 WCOAP Antes Only Champion.

The H.O.R.S.E. event at the WCOAP proved as popular as ever as 63 players bought into it on Thursday evening. Little did they know that this would result in the tournament being completed at 6:00am as most people were still in bed snoring away!

Those 63 entrants were reduced to the seven-handed final table at almost 3:10am on Friday morning, with the finalists lining up as shown:

Chris Vickery was the first casualty of the final table, his pocket kings falling victim to Francesco Belotti’s

when an ace appeared on the river.

Belotti then helped himself to the stacks of Richard Breen and Paul McGuinness before Maxcel Verdugo (pictured) sent Sean Lassman to the sidelines during a round of Razz.

Thanks to those eliminations, Belotti looked like he was going to walk away with the title with easy, but after losing a series of relatively small pots he found himself on life support and eventually put out of his misery by Verdugo.

The final hands of the heads-up battle between Verdugo and Timmy Mann took place during an Omaha round. All the chips went into the middle of a

, which improved Verdugo to a full house and won him the hand, the massive pot and the title of champion!

Scheduled for Friday is the Shootout championship, Day 2 of the Team Championship, the eagerly anticipated Six Max event and a Razz tournament too. All can be bought into — with exception of the Team Event obviously — for an affordable £55. Good luck.