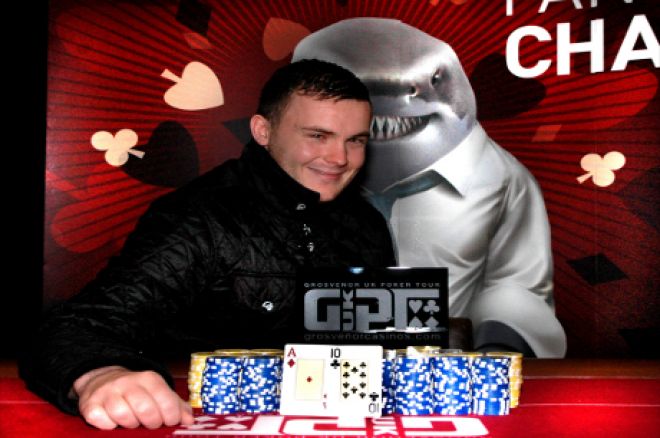 Jamie O’Connor is the latest poker player to have his name written into the history books of the Grosvenor UK Poker Tour (GUKPT) after he took down the star-studded GUKPT Luton Main Event over the weekend.

O’Connor had to outmaneuver a number of talented players on his way to victory, including the likes of his fellow final tablists, Shaun Conning, Luke “Full Flush” Schwartz, Tim Blake and the eventual runner up Dean Swift.

The first to be eliminated from Sunday’s final table was Tom Myland, who ran his top pair into the flopped flush of Andy Hills. Myland was joined on the rail by the aforementioned Conning who found his pocket fours were no match for the queens of Blake.

Blake was the executioner again to eliminate Mark Karoullas in seventh place, Blake catching running hearts to make another flush, this one besting the pair of Karoullas.

Hills was the next player to go, this time not at the hands of Blake but in a hand with O’Conner. Hills committed his stack with second pair only to discover he was completely crushed by the higher par of O’Connor. No miracle two-outer for Hills and he was sent for an early bath.

into Schwartz’s pocket kings, then his

couldn’t get there against Schwartz’s snowmen, despite flopping a flush draw.

Schwartz would then become the fourth place finisher, first losing a large pot to Swift before getting his short stack into the middle with

and not being able to improve against O’Connor who was sat in the big blind with ace-king.

Blake’s GUKPT Luton adventure came to an end in a huge 2,500,000 chip pot with O’Connor. The chips went flying on a

of O’Connor. The turn and river bricked and O’Connor progressed to the heads-up stages with a massive chip lead.

When a player of O’Connor’s ability enters a heads-up match with a monster chip lead there is only ever going to be one outcome; an O’Connor win. It wasn’t long before Swift’s stack was in the middle, this time with

, and O’Connor made the call with