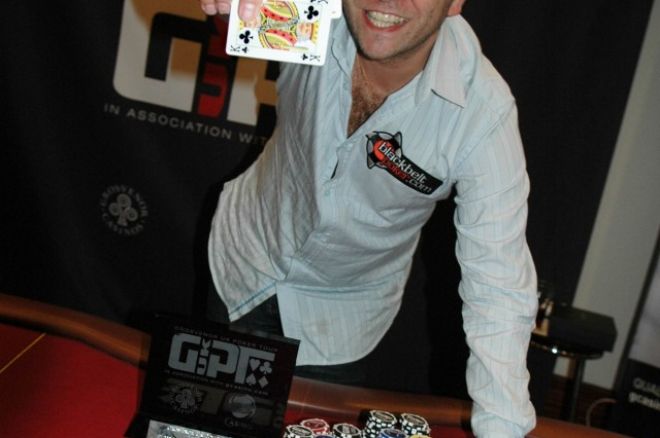 Just when we started to think Neil Channing was purposely taking 2nd in tournaments because he didn’t want any gold to clash with all the silverware on his mantelpiece, he went and proved us all wrong by hitting the top spot and taking first place for £64,050 in the GUKPT Main Event Luton.

229 players entered the £1000 No Limit Hold’em main event at the G Casino, Luton. After whittling down the field in the first part of the tournament, there were only ten players left when play started on Sunday. Channing was already chip leader but George White, Keith Johnson and Ricky Mackintosh were all close behind. Meanwhile Victor Ilyukhin was short stacked and had to make a move, it didn’t work out and he left the game in 10th place for £4,000.

Jeff Kimber and Joe Grech were the next two players out leaving the game 9th and 8th respectively when they both became the casualties of other peoples pocket aces. Only 7 players were left and Neil Channing was the player who took the remaining of Les Fenton’s chips, leaving Fenton out in the cold in 7th place but with £8,000 to soften the blow.

Next out was Ricky Mackintosh then Carlo Citrone taking home over £10k each and leaving only four players to battle it out. George White was the next player to be sent to the rail despite having had pocket aces no less than four times throughout the final. At this point Channing and Johnson were chip leaders while Odetoyinbo was short stack, he hung on in there though and after a while Keith Johnson lost most of his chips to Channing when he lost a race with his pocket 7s vs. AK. Keith Johnson was eliminated shortly after this beat, he took £43,500 for 3rd place and the heads up match began.

Heads up between Neil Channing and Adebayo Odetoyinbo lasted just a few minutes. It was another AK from Channing that meant Odetoyinbo had to ship all his chips and exit the game in 2nd place for £43,500 making Neil ‘badbeat’ Channing the GUKPT Luton main event champion 2010 for £64,050.

Talking about his win Channing said “The final table was pretty long. For just a second I nearly let myself get tilted. Managed to hit a few hands in the end and come through to win my first GUKPT. Proud to do so in my Black Belt Poker badge.”

Despite this being his first GUKPT main event title Neil Channing is an impressive and well known player within the world of poker. A regular live cash pro at the Grosvenor Victoria casino in London, Channing has proved that he is not just a cash game player by taking over the tournament circuit and amassing himself over $2.8 million in live tournament winnings. He was the Irish Open Champion in 2008 and has cashed in 25 WSOP events and more, now he is adding a GUKPT main event win to those impressive stats.

You can play in the next leg of the GUKPT which takes place in London and Manchester as part of the Summer Series, the week commencing August 23rd. Not only can you buy-in direct and qualify for any of the events at Blue Square Poker, you can do it for free with PokerNews if you use our amazing free £11 and £55 tournament token promotion when you sign up via our links.