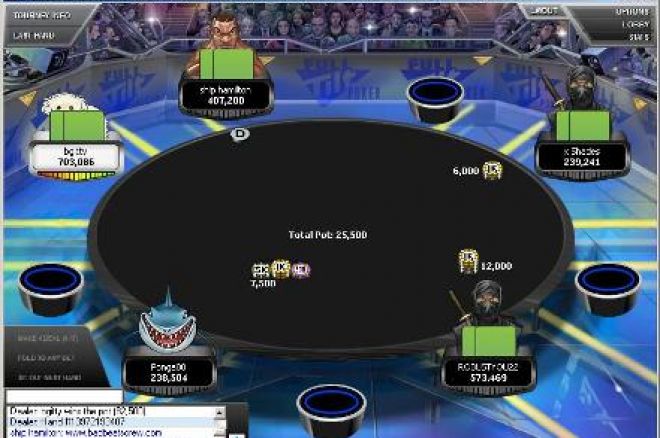 90 Man Sit & Go tournaments on Full Tilt Poker are an excellent and profitable way to gain multitable experience and build a bankroll. They have several benefits: (a) requiring only two hours to finish, (b) starting 100 blinds deep and increasing the blinds gradually providing experience for larger multitable tournaments and (c) being profitable due to both the structure and abundance of weak players; an excellent player may expect an ROI greater than 30%. This article will highlight important concepts to help you improve your 90 Man game.

Early and Middle Play
Much of the profit in the 90 Mans comes from stacking wild players who think they have to gamble early because they do not understand the stack depth of the early stages. They assume that because it is a turbo they must gamble from hand one. Note these players and loosen your all in ranges against them. Apart from exploiting bad players early stage accumulation is accomplished by playing solid deep stack poker and getting value out of your good hands.

Antes
Do not worry if you have not accumulated a large stack as the play progresses into the ante stages. A second important way to accumulate chips in 90 Mans is adjusting to the big antes that come into play in level ten. The large antes allow for quick accumulation for aggressive stealers. Contrast this ante structure with the 45 Mans at Full Tilt which have no antes and favor tighter solid play. Most players will not significantly change their calling and raising ranges between these two tournament formats. You must avoid this error by stealing more frequently to collect the larger preflop pots the antes build. Stealing from the cutoff and late position is very profitable in levels 10-12 as the blinds have not yet appropriately widened their calling ranges versus late position aggression.

Bounties
Approximately 17% of the prize pool is paid out as bounties for eliminating a player. The presence of bounties requires a few adjustments to your game. In the early stages capturing a short stack’s bounty will turn an otherwise marginally losing call into a profitable decision. As you approach the money, you can ignore the effects of bounties since the prize pool payouts are much larger than the bounties. Finally, it is important to note and exploit players who play sub-optimally loosely trying to hunt bounties when faced with a short stack’s all in.

Late Stage Dynamics
Looking for good spots to steal, rather than waiting for good cards becomes crucial as you approach the money. Try to look for and exploit weak players trying to limp into the money. With a weak holding try to steal in spots where you may easily fold verses most opponents’ shoves (opponents’ stack sizes in the 12-15 big blind range). You can open raise very small, 2.3x or so as most players will not adjust calling or shoving ranges to the smaller opening and the smaller open allows easier folds to shoves. Steal less against good players and against stacks less than 10 times the blind that are not scared money. You must also consider how the other players view your stealing, anticipating when and which players will start to play back versus your excessive thievery. A final note: stealing is met with much more aggression in the $52 90 Mans, and picking appropriate spots becomes much more important.

Restealing from the blinds with a 13-18 big blind stack versus a good regular with a similar stack who raises small in late position can be extremely profitable. Restealing also discourages attempts to steal your blinds, leading to more big blinds folded to you.

Shoving all with a 10-15 big blind stack versus a bad limper is a very profitable play. The bigger your stack or the more players yet to act after you, the stronger hand you want to have before you shove.

Finally, if it is open folded to you in the small blind, it is often very profitable to shove any two cards with 8-12 blind effective stacks, as the big blind will only be able to call with strong hands (see $ev below). Be wary of those opponents who call too light, as this will reduce both your and the big blind’s equity at the expense of the rest of the remaining players.

Math
Winning players work away from the table with Pokerstove or a similar tool to understand profitable shoving and calling ranges. Additionally, as you approach the money a positive chip equity play (+cev) may be a substantial losing money equity play (-$ev). Although this is a fundamental concept, a full explanation is beyond the scope of this article. As a brief introduction, the goal in the tournament is to maximize your payout. You may have to fold in +cev situations waiting for very short stacks to be eliminated, to try to move up the payout ladder. SitNGo Wizard is a program which uses independent chip model analysis to examine the relationship between cev and $ev and has a quiz section preset with the 90 Man final table payout structure.

Final table
Understanding the dynamic of the final table is crucial for success. Factors to consider include: distribution of chips, whether the aggressive players are to your left or right, whether the relative stack sizes and opponent’s tendencies will allow you to be the table captain or whether you must sit back and wait for hands and pick really good spots to show aggression. Restealing against an aggressive player’s late position raise with a middle stack can be very profitable against another middle stack or a big stack (if your shove would substantially reduce his stack), as players will not want to risk the majority of their chips while other players are close to elimination. As the table shortens, you must increase your aggression as the blinds and antes will make the stacks very shallow.

Check out Rahuls previous article on beating Rush Poker. Play the 90 Man KO SNGs exclusively on Full Tilt Poker where we have some exclusive $1,000 Freerolls