GGPoker is available to download via a dedicated mobile app in both iOS and Android versions. Play on the go from the palm of your hand with their unique and super convenient portrait mode.

No more jumping between your poker game and everything else you’ve got going on with your mobile device! Simple to navigate with one hand, swipe between multi tables, in-game betting gears for easy betting and of course, the GGPoker one of a kind “Squeeze” card feature that takes your poker experience to the next level!

Developed by poker players, for poker players - GGPoker has some serious game features that nobody else does. 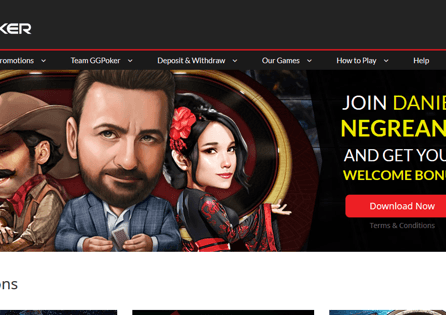 GG Poker continues to revolutionize online poker with exclusive new games and features that set it apart from the opposition.

Play at neck-breaking speed on the site's exciting Spin-and-Gold jackpot sit-and-go events and win big — or grind in the weekly $300k GTD GGMasters to win the most coveted leaderboard in 2020.

Whether you are after a $500k sponsorship to try a career in poker or you just want to play some easy games on your smartphone, GGPoker is the right poker site for you.

Continue reading to find our in-depth analysts of the GGPoker website, their offer, and the exclusive features that make this one of the most vibrant poker sites to discover in 2020.

Sign up for GGPoker now and choose between these two amazing Welcome Bonuses!

With a matched bonus, GGPoker matches the amount of your eligible deposit dollar-for-dollar, up to a maximum of $600.

This matched amount is credited to your bonus balance, which unlocks into cash as you play. $5 will be unlocked for every $20 paid in net rake/tournament fees.

You’ll have 90 days to unlock your bonus balance into cash.

GGPoker's VIP scheme is hilariously called Fish Buffet Rewards and is a 25-tier program that you can climb when you play real money cash games and tournaments. Everyone automatically joined the Fish Buffet when they create a GGPoker account.

Climbing the various levels have a time limit attached, with the base level awarding an expected 15% cashback, and the top 50% cashback. You receive a spin of the Fish Buffet Wheel each time you complete a level, with that wheel awarding a cash prize.

The GGNetwork, of which GGPoker is the flagship site of, launched throughout Asia in 2014 with its main focus being the South East Asian and Chinese markets. Canada and several European countries were added throughout 2016 and 2017.

Fast forward to today and the GGNetwork is the largest in the world and the GGPoker is the fifth-largest online poker site in regards to cash game traffic.

You are spoiled for choice at GGPoker thanks to the site offering classic poker variants and some unique games, too.

Action junkies can play All-In or Fold, which is exactly what it sounds like; you can either move all-in or fold!

There is also Rush & Cash, GGPoker's take on fast-fold poker. Random cash amounts are dropped onto random tables as you play Rush & Cash, taking the potential cashback to 65%! This is the fastest way to play cash games at GGPoker because you can click the "Rush" button to be whisked away to a new table with new cards and opponents!

Finally, there are Short Deck games available. Short Deck has quickly become the game of choice for high-stakes pros thanks to the action it creates having deuces through fives removed from the deck!

When it comes to tournament poker, GGPoker has you covered. At least $100,000 is guaranteed to be won in the Daily Guarantees, with all guarantees doubled on Sundays.

You'll also find other exciting tournament formats including Bounty Hunters, the Omaholic Omaha Series, Chinese Zodiak Series where thousands of Yuan are on offer every day plus special GGPoker avatars.

Every 30-minutes, $1, $2, $4 and $8 buy-in T$ Builder tournaments shuffle up and deal. These tournaments are rake free and all prizes paid out in T$, giving you a different way to satellite into larger buy-in events.

Finally, for tournaments, jump into the Phoenix Rebuys that run four times per day, starting at only $0.20. Bust out and you can rebuy for 300x your starting stack, resurrecting you like a phoenix from the flames!

The special features are what makes GGPoker stand out from the crowd. These features have been added following feedback from GGPoker's loyal customers.

Cash game players can Run It Three times, if both players agree, creating three different outcomes and three different pots. They can also straddle, a blind raise, before the hole cards are seen! These are just some of the amazing features:

Wondering if you would have hit your hand if you hadn't folded? use the Rabbit Hunt feature to see what the next community cards would have been. Be careful this doesn't put you on tilt!

Then there's All-In Insurance in cash games, which can be great for lowering variance. You can take insurance when the following conditions are met:

While traditional HUDs do not work at GGPoker, the software has a Smart HUD built in. Cash game and tournament players can see how many hands an opponent is player (shown as a VPIP percentage) while the border of this figure shows if a player is running blazing hot, hot, normal, or cold! It's a great feature that everyone has access to, levelling the playing field.

That HUD also has lots of information inside it. Cash game players can discover your record against a particular player plus your three biggest hands against them. MTT grinders can see a player's total winnings and their current leaderboard ranking.

One of our favorite features is the option for tournament staking, a feature unique to GGPoker. You can buy pieces of players' action, or even sell pieces of your own. Sometimes, GGPoker ambassadors such as Daniel Negreanu, Bryn Kenney, and Felipe Ramos sell action in the events they're playing!